Essential duties and responsibilities include:

The development of a Tribal Media Center, a key component of KSUT’s comprehensive plan, builds on our last 45 years as an invaluable service to Native Americans in our region. The KSUT Tribal Media Center, in partnership with other Native-focused organizations, will offer multi-media training and production opportunities resulting in unique and compelling storytelling content.

Additional TMC offerings to include:

Preference will be given to qualified Native American applicants in accordance with the Southern Ute Indian Tribal Employment Rights Code. Appropriate verification of Native American status is required. Other than the aforementioned, Federal Law requires that all applications be considered without regard to race, religion, color, sex, age or national origin. 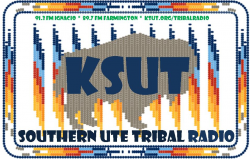 KSUT Tribal Radio was founded in 1975 by the Southern Ute Indian Tribe as a means of communication with tribal members. KSUT is now an independent non-profit organization and has two distinct FM signals: Four Corners Public Radio and Tribal Radio. Based in Ignacio, Colorado KSUT Tribal Radio serves the Southern Ute, Ute Mountain Ute, Jicarilla Apache and portions of the Navajo Nation with its terrestrial signals, and streams its signal at www.tribalradio.org